Dear Mom, I’m so Sorry You Grew Up Living With Domestic Violence 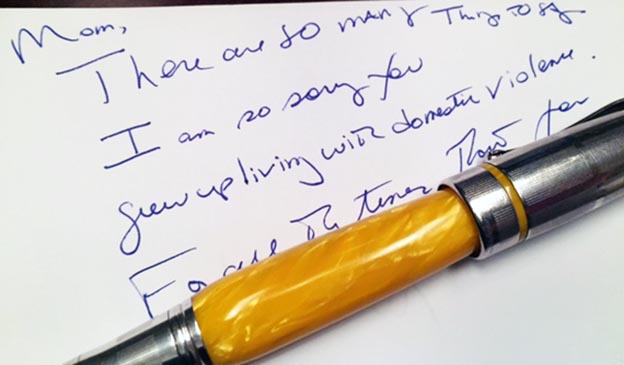 A card for Mother’s Day takes time to pick out. For a person who grew up living with domestic violence, it takes even longer. There is so much they want to say, but Hallmark hasn’t quite captured the language.

If I were to write one, I would probably start out with, “On this Mother’s Day, I want to tell you something that I never told you. ‘I’m so sorry that you grew up living with domestic violence.'”

Because most who do, don’t even know that they experienced Childhood Domestic Violence

I would want my mom to know that most people who grew up living with domestic violence don’t know that they experienced Childhood Domestic Violence (CDV). There was a massive study called the Adverse Childhood Experiences (ACE) Study that examined 10 major childhood adversities and documented the impact that they can have on a life. One of those adversities was specific to growing up with domestic violence and the possible effects.

I would ask my mom if she had heard of or more likely experienced one of the following; physical child abuse, child sexual abuse, emotional abuse, divorce, parental alcohol or drug addiction, etc. But she probably never heard of — Childhood Domestic Violence — which is when a person grows up in a home living with domestic violence. From a childhood standpoint, domestic violence is violence between your parents or violence towards a parent — perhaps from a stepparent or significant other.

I knew that I experienced CDV, I learned that my mom did, so did her mom, her boyfriend…

My mother and I only began speaking of CDV a few years ago. I asked her if she would talk to a person who was helping me research a book I was writing called INVINCIBLE. I was shocked when she said ok.

I set up the call between the two of them while I was in my office, put it on speaker with the phone muted so no one could hear me, and just listened.

“Marilyn, if you were to use a word to describe your childhood, what would it be?” asked the interviewer.
“Oh, it was violent,” my mother responded.

Not understanding what she was saying, I quickly said out loud. “No mom, listen to what he is asking! He’s not talking about MY childhood, he’s talking about YOURS.”

Then, I listened and I teared up as she continued. As much research as I did and as many stories as I have heard, I never thought that she experienced the same thing I did. That she faced the same adversity in childhood. And I soon found out that so did her mom.

If you experienced CDV, perhaps your mom did too, or your dad, or your boyfriend or husband

The shocking reality is that while 15 million children currently experience CDV in the US, there are 40 million adults who once were those children just a generation ago. Most don’t know how to talk about it and most never bring it up with their children. It’s very likely that a person close to you experienced CDV, but you may not know it, just as I didn’t know my mom had. You are not alone.

The impact that CDV has is wide spread. And leading researchers agree that adults “…often cannot connect the dots between what they experienced in their childhood homes and the challenges they face today.” I would want my mom to know this. Because when I first heard it, it changed my life and gave me a better understanding of why I am who I am. I would want her to experience that too.

However, many adults who grew up living with domestic violence have found a way to give their children the greatest gift

And though among the best predictors as to whether a person will be a perpetrator or a victim of domestic violence later in life is whether or not they grew up living with domestic violence, so many adults who experienced CDV are still able to provide a peaceful home for their own children. It is one of the greatest gifts a person can give to a child – to shield them from violence inside their childhood home. Why are some able to do this while others are not?

It is ‘Ordinary Magic’ when THE ONE steps in

Some believe that those who are resilient to experiencing CDV possess a highly rare, unique quality, or an extraordinary special gift. They say “that’s just how they are.” That is not true. Researcher Anne Masten refers to what happens, what promotes resiliency, as an “Ordinary Magic.” The child who grows up to become resilient does so because a caring adult – THE ONE – stepped in to help them unlearn LIES, or negative beliefs, that CDV encoded in their developing brain, which can lead to problems in adulthood with relationships, emotions, behaviors, and health.

You need not be a child expert to be THE ONE. This most often takes place through normal relationships where you can be a protective factor in the life of a child. By taking some small actions and sharing some simple messages, you can begin to positively transform a life. You can learn more and be The ONE for someone impacted by CDV by taking the evidence-based, free online program, Change A Life.

What your children would tell you if they knew

You can share with your children that you experienced CDV without feeling ashamed, guilty, or fearful, because you know the pain that growing up in a home with domestic violence can cause. And if they knew, inside they would feel a great sense of compassion and one day, perhaps that same day, they would tell you “I’m so sorry you grew up with domestic violence.” Just as I told my mom.