Isolation of families for coronavirus raises concerns about domestic violence 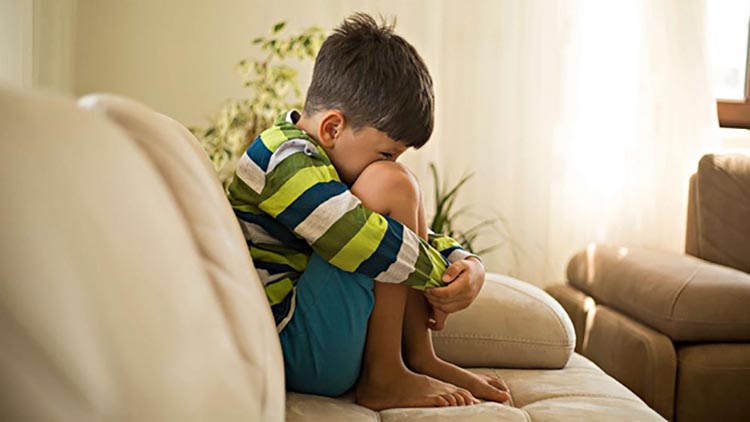 How to self-quarantine during novel coronavirus

If a person is exposed to COVID-19, it is vital to self-quarantine for 14 days.

As schools across the country close and employees are encouraged to work from home in order to prevent the spread of the novel coronavirus, some experts are concerned about an increase in domestic violence.

The outbreak of the coronavirus, formally known as COVID-19, hit in the United States on Jan. 21 with the first case in Seattle, and eight weeks later, it had spread to every state. As of Thursday, the U.S. had 9,400 confirmed cases, 150 people had died, and 106 patients had recovered.

In order to stem the spread of the virus in group settings, state and local governments have closed schools affecting at least 42.1 million school students, according to Education Week, and many companies with remote-access capabilities have directed employees to work from home. 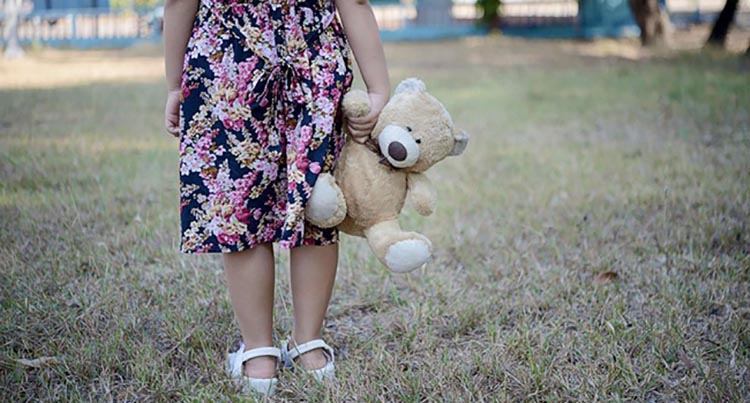 “But in this particular time, with COVID-19, home can be pretty intense for domestic violence victims and survivors, due to the abusers ability to further control,” said Ruth Glenn, the president and CEO of the National Coalition Against Domestic Violence (NCADV).

“Survivors and children may have had some respite by going to work and school,” Glenn said.

Across the country, shopping malls, movie theaters, select brick-and-mortar stores, bars, restaurants, hair salons and other businesses have closed or reduced their hours, limiting where people can go for social interactions.

“Because of this situation — the quarantining and social distancing and isolation that is occurring because of the COVID-19 — it can certainly allow abusers to have more tactics they can use to maintain their control,” Glenn told ABC News during a phone interview.

With so much misinformation about COVID-19, Glenn said that abusers could employ that false information to control the abused.

“‘You can’t go out the front door’ — they may have said it before, but didn’t have a reason for the person to not go out the front door. ‘COVID’s out there! COVID’s out there!’ the abuser may now say,” Glenn said. “The abuser may have many sundry ways they can employ new tactics or enhance other tactics, controlling movement, really not allowing them to have access to a phone or computer, the list can go on and on.”

According to NCADV, 10 million people every year are physically abused by an intimate partner, and 20,000 calls are placed each day to domestic violence hotlines. Researchers have estimated that between 3.3 million and 10 million children are exposed to adult domestic violence each year, according to the Resource Center on Domestic Violence: Child Protection and Custody, a project of the National Council of Juvenile and Family Court Judges. 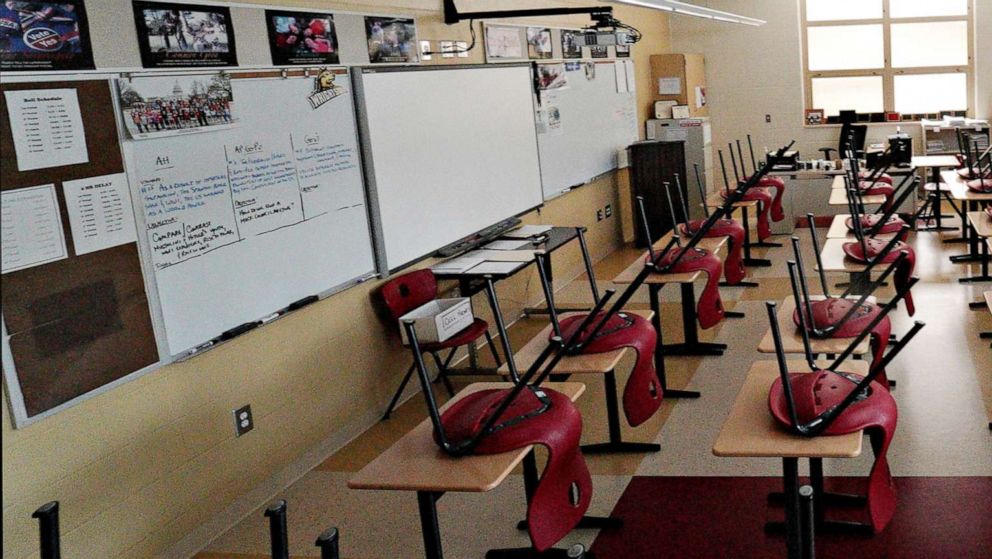 A classroom sits empty ahead of the statewide school closures in Ohio in an effort to curb the spread of the coronavirus, inside Milton-Union Exempted Village School District in West Milton, Ohio, March 13, 2020. Kyle Grillot/Reuters

“For some, the self-isolation is like quarantining yourself anyway when you are home with the abuser … you’re living in terror,” said Dr. Tricia Bent-Goodley, an expert with the National Association of Social Workers (NASW) and a social work professor at Howard University,

The district attorney of Westchester County, New York — where a one-mile containment area was created around the New Rochelle community — issued a statement on Thursday expressing his “increased concerns” for domestic violence victims during the social isolation period.

“This causes a time of high stress for all families and particularly for the most vulnerable among us. My office is here to help,” said Anthony A. Scarpino. “If anyone believes they are a victim or at risk of being a victim, they should call 911 or contact their local police or call our Special Prosecutions Division.”

ABC News interviewed domestic violence advocates who provided advice on how to prepare for isolation or quarantining if you or someone you know is living in a hostile environment.

What can survivors living in domestic violence situations do during quarantine?

Bent-Goodley stresses that any person in an abusive relationship should know that there are resources out there to help them, no matter where they are in the country.

“One day COVID-19 won’t be here, but while it is right now, what are the things we can plan for? I tell people about the National Association of Domestic Violence hotline, 1-800-799-SAFE, all the time,” said Bent-Goodley.

“They can access it online just in case they don’t want to risk calling,” he added. “And what’s good about that resource is if they have to get off immediately, there is an escape button they can hit that will take them immediately off the page and remove it from the cookies.” 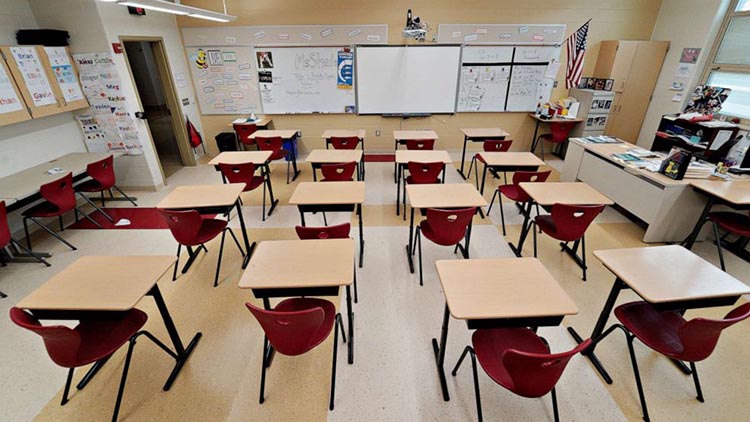 A classroom sits empty ahead of the statewide school closures in Ohio in an effort to curb the spread of the coronavirus, inside Milton-Union Exempted Village School District in West Milton, Ohio, March 13, 2020. Kyle Grillot/Reuters

NADV, one of the most established anti-domestic violence organizations, has counselors that can help those in need develop a safety plan, Glenn said. A “safety plan” covers how to respond to future abusive or violent incidents, how to prepare for the possibility of an incident happening, and how to get to safety with trusted family, friends, co-workers or neighbors.

“When you think about it, what so many survivors need is to be able to access information and to get out as quickly as possible, and not have to worry about somebody else finding out about it,” Goodley told ABC News. “My hope is for anyone who is enduring abuse to get a safety plan. Make sure that if there is any safety plan that you adhere to that, if you feel comfortable, let your family and friends know that you are quarantined in your home and you feel like it might be different to have communication with them.”

Glenn also encourages getting a “system order,” like an order of protection or an order with child services, and to “follow the guideline to the T.”

“If you see that your perpetrator is skulking, then do what you would normally do and call the police — but you should also have a personal safety plan set … you’ll put a chair under the door or you’ll call your sister and you’ll quarantine somewhere else,” said Glenn. “I always look at it that way because the system is in place to protect us, but the system cannot fully protect us.”

What can children and parents living in a hostile environment do?

“One of the hardest things for a young person to deal with in that environment is that they don’t really know what to call it,” said Brian F. Martin, the founder of the Childhood Domestic Violence Association (CDVA).

Physical abuse, sexual abuse and emotional abuse are all recognized terms for different kinds of abuse toward children, but the abuse suffered by children who grow up around domestic violence — known as “childhood domestic violence” — isn’t as well known, Martin said.

Once Martin, who grew up in a domestic violence household, found there was little research on childhood domestic violence, he dedicated the last 13 years to supporting those affected through three programs:

— The Change a Life Training Program, a free online program endorsed by UNICEF and Children’s Mercy Hospitals, teaches adults how to become “the one” — a trusted adult who steps in and offers simple support and messages of hope that can foster resilience and help change the life of a child growing up with domestic violence.

— The Resiliency Focused Mentoring Training Program, an eight-hour certification program accredited by the NASW for professionals who interact with children which are impacted by childhood domestic violence.

— A Nickelodeon-produced 22-minute children’s program, “Family Secrets: When Violence Hits Home,” gives a platform to children living in domestic violence and shows how they were able to begin to overcome the experience.

“Living with childhood domestic violence, it has a significant impact,” said Martin. “Experts say that if you grow up in one of these environments you’re not going to reach your full potential until someone — ‘the one’ — steps in.”

In a childhood domestic violence household, “one of the instincts is for the child is to go to the parent that is hurt because they want to help.”

Bent-Goodley says children should know that calling the police is a critical option — albeit a tough one.

“A child may feel like if they call 911, they are going to get their parent in trouble or ‘I’m going to get removed from the house,’ and they may not want that, so that becomes a tough call,” said Bent-Goodley.

“We’ve talked to thousands of children and adults who say they’d rather themselves be hurt than see the person they love most in life hurt,” said Martin. 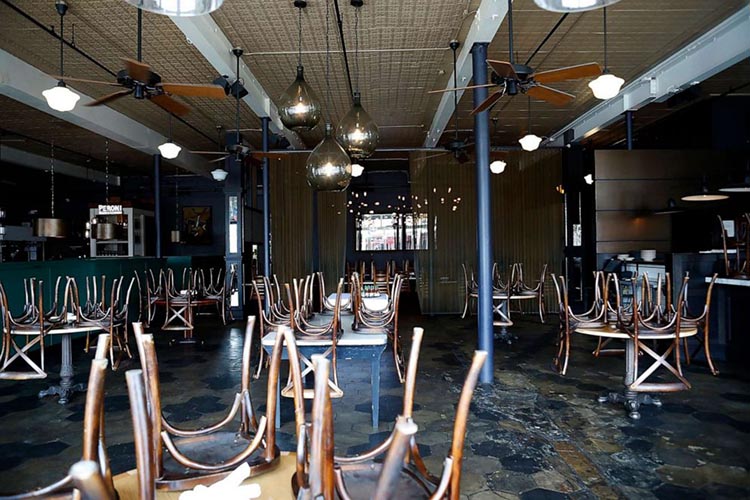 Carmine’s Ybor restaurant is closed early due to the coronavirus pandemic keeping patrons away in the Ybor City neighborhood in Tampa, Fla., March 16, 2020. Octavio Jones/AP, FILE

Through these programs, “we want to give the child the vocabulary, the understanding, that they are not alone, so they can see some other children who went through it, so they can see they can come out on the other side.”

“For the parent, the adult, the ‘Change a Life’ program can help them get to know what to say to their child, because they don’t know what to say, because they are in a place of fear and uncertainty,” said Martin. “‘What do I say to my child? Does she know? Did she hear? Did she see?’ Most of the time, the children know. The program gives the parent an insight in order to help their children talk to them.”

What can the community do to help those living in domestic violence households?

Bent-Goodley says that although churches are closing because of COVID-19, this is an opportunity for “our faith-based community to say, ‘Hey! We may not be having a service, but our doors are still open, we are still present.'”

She also suggested that neighbors check up on each other — but not put themselves at risk.

“If you can be a resource to someone or support a person, whether it’s asking, ‘Hey do you want me to take your child for a while to give you guys some time?’ that might provide the opportunity for the child to say I need help,” said Bent-Goodley. “It’s a tough situation, but it does require all of us to put our heads together to figure out how to best support one another.”