The Most Helpless Victims of Domestic Violence are so Often Invisible 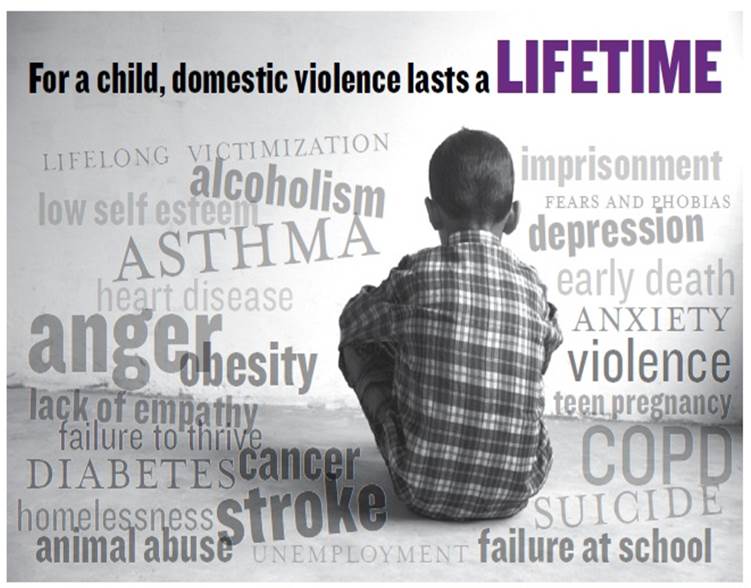 In many cases of Domestic Violence, children more often than not are overlooked as victims because they were not the direct target of the violence. But, according to decades of evidence, they’re equally impacted by these circumstances, with often grave repercussions. Simply hearing, seeing, and being around the violence is sufficient to profounding affect them mentally, emotionally, and/or behaviorally, potentially for the rest of their lives. John McCarthy and Angela Alsobrooks, state attorneys from Maryland, reaffirm this in their article “The Invisible Victims of Domestic Violence” alongside countless other studies and articles. For this reason, it is imperative that caring adults intervene and help guide impacted children to help them stay on the right track and overcome their negative experiences in their childhoods.

Children who grow up watching violence between their parents or both of their parents, from a step parent or significant other are experiencing Childhood Domestic Violence, one of the 10 major childhood adversities a child can face at home that could have a defining impact on their life. These children’s mental state is drastically altered, even if the violence is not daily but occurs occasionally. According to McCarthy and Alsobrooks, “children exposed to violence are more aggressive, disobedient, withdrawn, and depressed and exhibit lower self-esteem. The experience also can lead to poor school performance and diminished problem-solving skills.” Children who grow up with violence in their homes also have an increased chance of becoming future perpetrators or victims of domestic violence, as well as of incarceration. “The strongest risk factor for the transmission of violent behavior from one generation to another is for a child to repeatedly witness violence in the home.”

McCarthy and Alsobrooks discuss more specifically the arrest of a man named Jeremiah Sweeney for first degree murder and his sentencing to life in prison in April 2011, when he was only 24 years old. Prior to this incarceration, Sweeney had had 25 run-ins with the criminal justice system. They also observe that he experienced Childhood Domestic Violence (CDV) since early childhood. “Sweeney made it clear that it wasn’t just a push here or slap there.” The authors discussing pose the question of whether had Sweeney not experienced CDV, his life may have turned out differently. Research on the effects of domestic violence on children suggests that the likelihood of Sweeney going down this path without a childhood filled with adversity would have been significantly lower, as children who are impacted by major adversity like CDV are 74% more likely to commit a violent crime, among a domino effect of other statistics associated with adversity in childhood, such as increase risk for suicide, major health problems, severe anxiety, depression, substances abuse and repeating the cycle of domestic violence.

Unfortunately, most children who grow up as Sweeney did are never intercepted by those in a position to help positively impact them and shift the odds for them, because our society still doesn’t really understand CDV or the gravity of its impact. These children still largely remain invisible victims, which prevents frequent and effective interventions that can change the course of their lives. The consequences are often daunting, as in Sweeney’s case. But even among those who do not become statistics, the likelihood of reaching their potential and living the successful, fulfilling, happy life they were meant to have is low.

The good news is that if you grew up with major adversity like CDV as well, there is hope. The negative programming encoded in your brain in that home can be replaced with positive  beliefs and thoughts, by exposure to the TRUTHS that void the LIES you learned in that home about yourself and the world. Our website is dedicated to helping those impacted by CDV overcome the impact and change their lives…or the lives of loved ones who grew up with it. Visit www.cdv.org to see our tools and programs and start the journey.

To read more about the invisible impact that can be lifelong, click here for the full article,“The Invisible Victims of Domestic Violence” by John McCarthy and Angela Alsobrooks, https://www.washingtonpost.com/opinions/the-invisible-victims-of-domestic-violence/2013/02/15/b684c5c4-7630-11e2-95e4-6148e45d7adb_story.html?utm_term=.1d6238203e0e