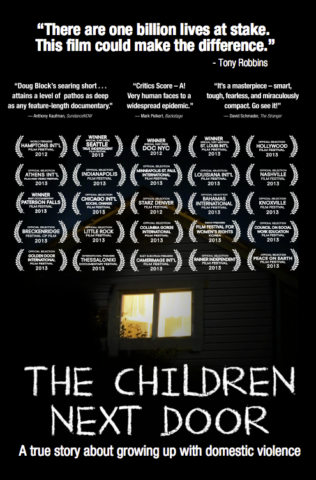 The Children Next Door, an Award-Winning documentary sponsored by Children of Domestic Violence and released last fall, made its international debut at the prestigious Thessaloniki Documentary Film Festival in Greece this past Friday, March 15. This documentary short about domestic violence as seen through the eyes of a child has already screened at 3 top-25 film festivals and won the Special Jury Prize at the prominent DOC NYC film festival last fall.

This film is the first of its kind, as it recounts the fear and pain of domestic violence from the child’s perspective and uses the big screen to reshape the way we individually and collectively view the issue. It’s a poignant portrayal of growing up in a home with violence and shows the emotional scars that can linger long after the violence has ended. It’s a powerful example of the impact of this experience on the lives of these children and portrays how they are often doomed to repeat the cycle as adults…unless they unlearn what they learned as children.

The Children Next Door World-Premiered last October – Domestic Violence Awareness Month – at the Hamptons International Film Festival. It subsequently screened along with an accompanying panel discussion at the Starz Denver Film Festival. Soon thereafter, it also participated at the world-esteemed DOC NYC festival, where it snagged the Special Jury Prize. At the Thessaloniki Documentary Film Festival, which opened last Friday, the film was screened twice – during the evenings of March 15 and March 17 – and was seen by viewers from around the world.

Producer Lynda Hansen and Director Doug Block worked closely with Children of Domestic Violence throughout the production process. The film puts the spotlight on the children so often overlooked in the public discourse on domestic violence. It’s an essential component of a national social action campaign intended to elevate society’s knowledge and understanding of childhood domestic violence, plus help those impacted reach their full potential and break the cycle.

UNICEF calls experiencing domestic violence as a child “one of the most damaging unaddressed human rights violations in the world today.” This little-known and infrequently-talked-about issue impacts hundreds of millions worldwide – 5 million children and 40 million adults who were these children right here in the U.S. Those impacted are three times more likely to repeat what they learned as adults. Today, more than half of all children who experience domestic violence are being raised by a parent who was a child of domestic violence. Without awareness and change, the cycle will likely be handed down to the next generation…and the one after.